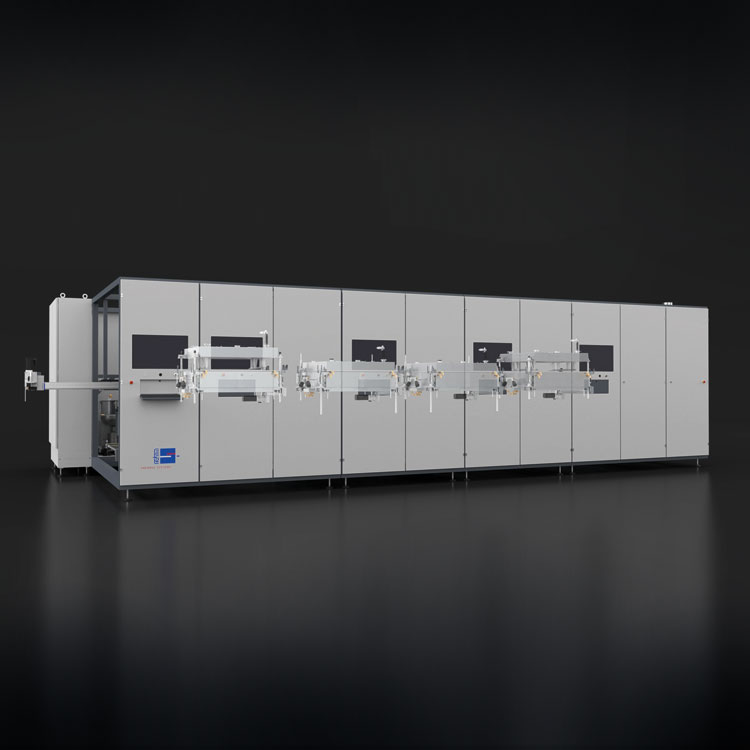 However, a conventional vapor phase soldering system does not meet modern requirements for throughput per production line. This means that new approaches have had to be found, combining the advantages of the vacuum soldering process with the vapor phase and allowing large quantities to be produced and thus cycle times to be reduced. Rehm Thermal Systems has implemented this approach with the new CondensoX-Line Quad Core.

This new system type allows four parallel vacuum soldering processes to be performed in order to achieve both the highest throughput rates and continuous process operation during maintenance work. Since the chambers can be operated individually and independently of each other, preventive maintenance can be performed on a process chamber without causing a line stop. In terms of system availability, this results in a considerable increase, as throughput is reduced by 25 percent for a foreseeable period only. The process chamber is loaded simultaneously on the upper transport level. On the lower transport level, further assemblies are transported to the next available chamber module via an independent transport system.

These individual process chambers contain both the vapor phase process and a complete vacuum process. The pressure values, as well as the temperature profile, can be influenced during the entire process. This enables the advantages for controlling temperature and pressure to be used. Advantage 1: Vacuum before and during the soldering process; Advantage 2: Lowering of the Galden boiling point for low-melting solders; Advantage 3: Gas exchange during the process (vacuuming of contaminants, flux-free soldering).

The independent transport process for the four chamber modules is also reflected in the unloading of the process chambers. This process is also independent and no soldering processes in any other process chambers are influenced. The cooling process is located at the rear of the system and is performed by convection at each chamber station. Efficient cooling adopted from the convection soldering machines ensures that the products arrive at the system outfeed at a manageable temperature.

The system concept of the CondensoX-Line Quad Core by Rehm Thermal Systems is so impressive that one of the world’s largest manufacturers of computer and gaming hardware has integrated this system into its manufacturing concept. It had already discovered the advantages of vacuum vapor phase soldering, but the previous systems could not meet its throughput demands. The required cycle times range from 12 seconds per unit to 60 seconds per unit. These cycle times include the use of the vacuum to reduce product voiding.

The CondensoX-Line Quad Core is the only vapor phase soldering system in the world to allow process gases and formic acid to be used as well as continuous vacuum processes (pre-vacuum, process vacuum, main vacuum) and high throughput rates.

As a specialist in the field of thermal system solutions for the electronics and photovoltaics industries, Rehm is a technology and innovation leader in the modern and economical production of electronic modules. As a globally operating manufacturer of reflow soldering systems with convection, condensation or vacuum, drying and coating systems, functional test systems, equipment for the metallisation of solar cells as well as numerous customer-specific special systems, we are represented in all relevant growth markets and, as a partner with 30 years of industry experience, we implement innovative manufacturing solutions that set standards.