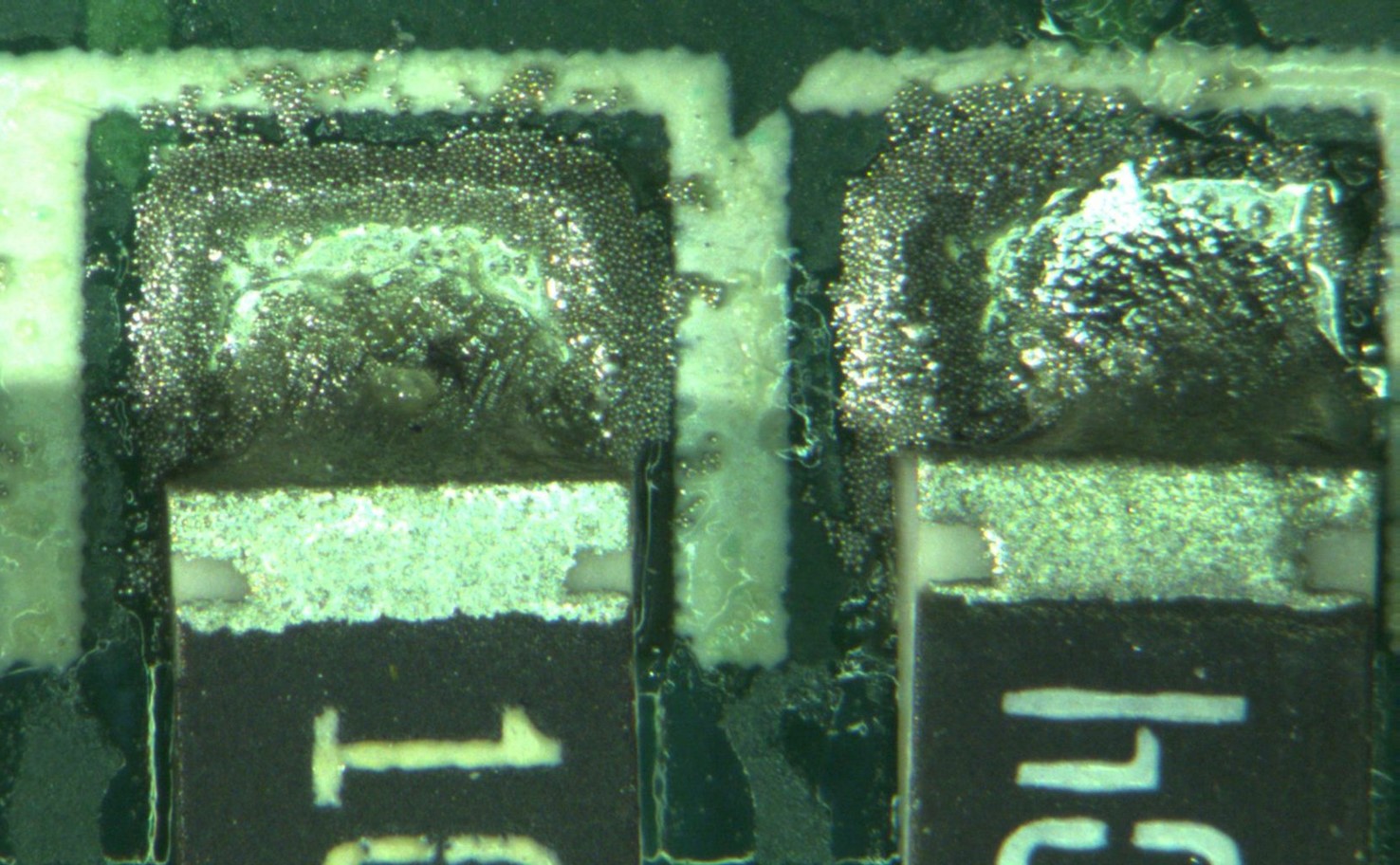 A typical question put to a manufacturer of reflow soldering systems like Rehm Thermal Systems is often: “What is the benefit of a nitrogen atmosphere?” In the following we will explore this question in relation to typical defect scenarios, including those involving solder balls, beading, voiding, whiskers, graping, head-in-pillow, wetting defects and tombstones. While soldering atmosphere selected can cause or accelerate various soldering defects, it can also prevent or reduce them. The convection soldering systems from the Vision series by Rehm Thermal Systems are designed as air or nitrogen systems.

Solder balls / beading
A very common defect involves solder balls or beads on two-pole components (chips), and is thus referred to as beading. Beading is caused when solder grains in the paste make their way under the component and are then squeezed out of the gap under the chip during reflow. All the solder pastes examined showed reduced beading after reflow soldering in a nitrogen atmosphere. The reason for this appears to be the better and faster fusion of the individual solder grains in the paste into a uniform solder volume. The absence of oxygen prevents the formation of oxide films on the surface of the solder grains, which would hinder fusion. This reduces the probability that individual solder grains will penetrate into the gap below the chip.

Voiding
Similarly, the lower pore formation – otherwise known as voiding – in surface and QFN soldering is attributed to the better wetting. The fast-wetting solder can expel the gases produced during reflow soldering more efficiently from its liquid volume. These results cannot be generalised to all solder joints, however.

Graping
Flux properties are subject to constant change and improvement. However, classic properties such as cold and hot slump are not to be neglected in reflow profiling. Time above liquidus and slope gradients are not the only decisive factors here. In miniaturisation, the paste grain size also plays a role. The smaller the diameters become, the more they have to be “protected” by the flux. If the protective flux has disappeared from the paste grain due to “bleeding” in the preheating area (hot slump), it oxidises and will subsequently remelt – but will no longer fuse with other paste parts. The oxide layer is impenetrable and the appearance resembles a bunch of grapes – hence the name graping. The inert atmosphere enlarges the process window, but does not completely eliminate the influence of the flux.

Head-in-pillow (HiP)
The head-in-pillow or head-on-pillow effect is caused by an oxide layer on the BGA ball that prevents the paste grains from fusing. Typically, twisting and warping of the BGA and/or PCB causes separation of the paste deposit from the BGA ball. The lack of flux activation causes an oxide layer to form on the ball, which later prevents it from “fusing” with the paste deposit, even though it is “dipped” back into the remelted paste deposit. As the flux has been used up at this point, the oxide layer can no longer be reduced and no connection occurs, giving the ball the appearance of resting in a pillow (head-in-pillow; HiP) or on a pillow (head-on-pillow). If oxidation during separation is prevented by an inert atmosphere (N2 or vapour phase), the paste deposit and the ball can fuse. A small degree of residual activation by the flux must still be present, however. Here too, an inert atmosphere protects the flux, as there are fewer oxides to be reduced.

Wetting defects
The good wetting conditions under nitrogen usually lead to better spreading of the solder and prevent soldering defects due to wetting deficits of the soldering surfaces (IPC 610). While this is well known, the expected improved soldering results are not always achieved. Chip soldering is characterised, among other things, by the shape of the resulting meniscus. The height of the raised solder is a quality characteristic. The observed wetting height may be lower under nitrogen than under air. In other words: the non-wetted area (gap) increases. The reason for this is actually the improved spreading of the solder under nitrogen. Since the solder has to work against its gravity to wet the component connection, the PCB pad is wetted more easily; in addition, the sphere height is lower when there is greater spreading. As a result, there is less solder available to rise at the component connection.

Tombstones
Tombstones are caused by differences in wetting times between the two sides of a two-pole solder. If one of the solder joints melts before the other, the wetting forces and surface tension of the liquid solder straighten the component. The second solder deposit, which melts with a time delay, is then no longer able to wet the second component connection. Under a nitrogen atmosphere, an increased number of tombstones are often observed after reflow soldering. The reason for this is once again the improved wetting, which usually increases the wetting time difference between the two component connections. However, interactions with other influencing factors can also be considerable in tombstoning.