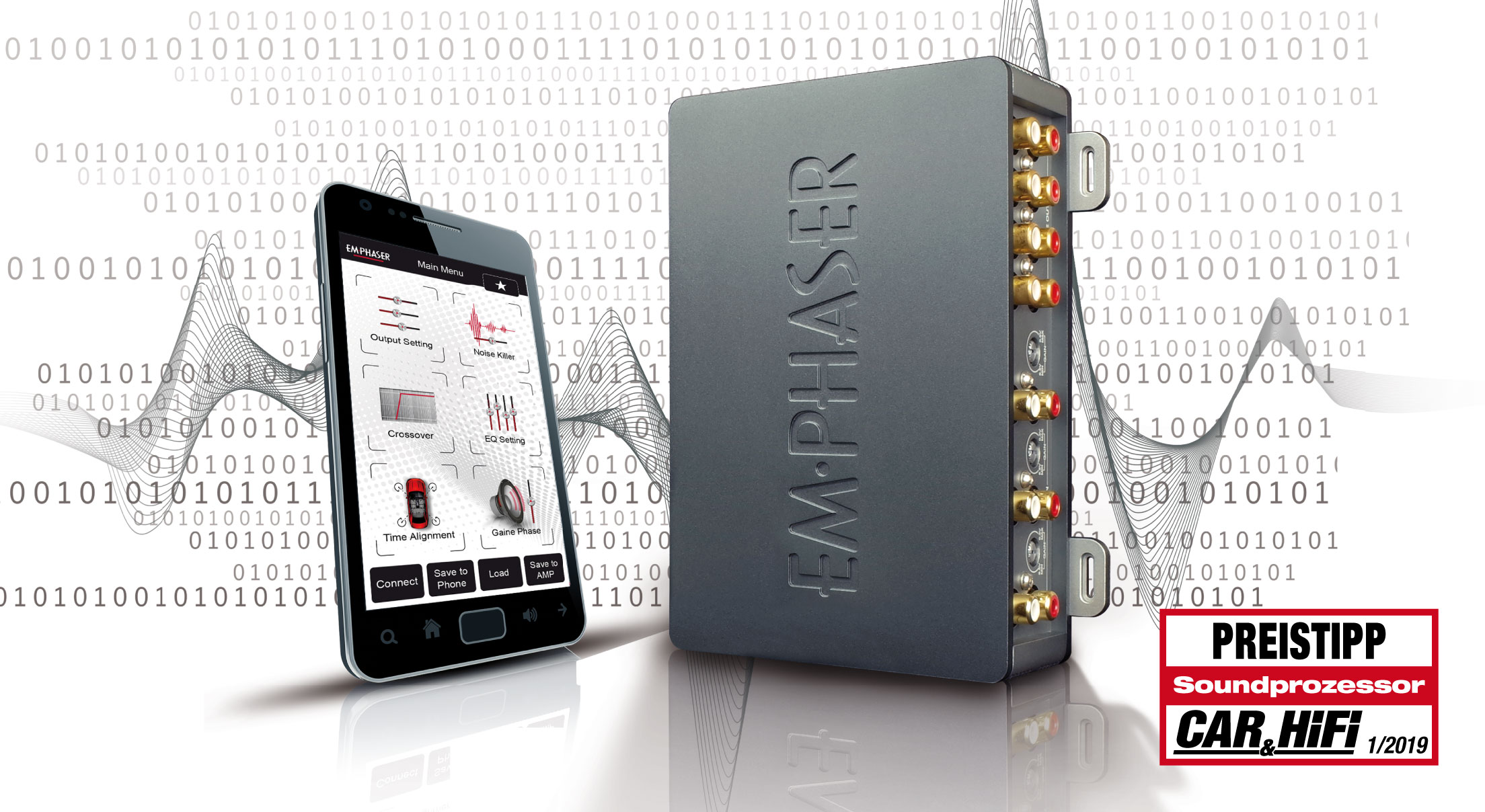 “Full-feature 8-channel DSP at a low price”, is the verdict of the testers of the German magazine (Car & HiFi 01/2019), awarding the EA-D8 a ‘Price Tip’ recommendation

Over many years the traditional car audio brand EMPHASER has stood for uncompromising sound with lots of power. In spring 2019 EMPHASER launched a raft of new products on the market. For example, the DIGIT series, two DSP power amps with 5 and and 8 channels, plus the digital 8-channel sound processor EA-D8, which was tested by Car & HiFi magazine in issue 01/2019. “Full-feature 8-channel DSP at a low price”, is the verdict of the tester team, awarding the EA-D8 the ‘Price Tip’ accolade.

MULTITUDE OF SETTING OPTIONS
The heart of the new sound processor is the integrated DSP, which enables the music signal to be tuned to the vehicle acoustics in a multitude of ways. According to the experienced testers: “Altogether you have everything you need for driving a fully-fledged car audio system – even on a factory radio if you wish”. Each of the 8 channels has a parametric 7-band EQ. The time alignment can be precisely set in 1 cm increments. In the crossover menu a bandpass is available for each channel. High and low pass filter slopes can be separately set as steep as 24 dB/octave. “The bass enhancer and the noise gate are two extras that we would like to take with us”, add the tech journalists. “For the price the EA-D8 therefore represents an attractive package.”

INTELLIGENT SOUND CONTROL
The tech journalists are also impressed by the “fast and intuitive” control of the DSP functions via the smartphone: “The small antenna at the rear immediately indicates wireless communications, and in fact you will search in vain for a USB port for connecting a PC. The E8 is therefore programmed with a smartphone app, which is freely available for both iOS and Android devices.”
In addition, it is possible to stream audio over Bluetooth directly from the smartphone to the amplifier: “What is very nice is that EMPHASER has really done a good job with the EA-D8, and also implemented music streaming with Bluetooth as well, (…) during which the BT source is automatically switched on and off according to the signal input.”

HIGH QUALITY HARDWARE
The EMPHASER sound processor also shines as regards the hardware: “Inside everything is well arranged. The front third of the board is taken up with the analog signal conditioning, and using quality single-channel op amps for the inputs is admirable”. But that”s not all: “The heart of the device is made up of two small ADAU1701 DSPs from Analog Devices with a 28-bit bus width. For an 8-channel processor one would have done, but the 1701 comes with two AD and four DA converters, which saves on external converters.”
If desired the EA-D8 can also be connected to the ISO connector of the vehicle via an optional Plug & Play cable. “It could not be easier, especially as there is an auto turn-on feature”, is the verdict of the Car & HiFi testers. “In addition there are six Cinch inputs so that the EA-D8 also harmonizes perfectly with retrofitted radios.”

SUMMARY
“With the EA-D8 EMPHASER presents a signal processor with a complete audio configuration and enough channels for a fully-fledged system that has turned out really well and costs little”, according to the summary of the Car & HiFi editors. “Special praise is merited for the integrated Bluetooth audio streaming and the practical app control.”

EMPHASER has been a name in the car audio sector for 25 years. The brand has become a well respected brand since middle of the 1990s for its enormously powerful subwoofers of the XTREME series, followed later by the series SPL, Linear-X, Neo-SPL and the state-of-the-art woofer E15NEO-COMP. The present range covers subwoofers, vehicle-specific Plug”N”Play component sets and classic lines of loudspeakers and amplifiers.
EMPHASER products are distributed exclusively through Europe’s largest car media specialist, the Swiss ACR AG.