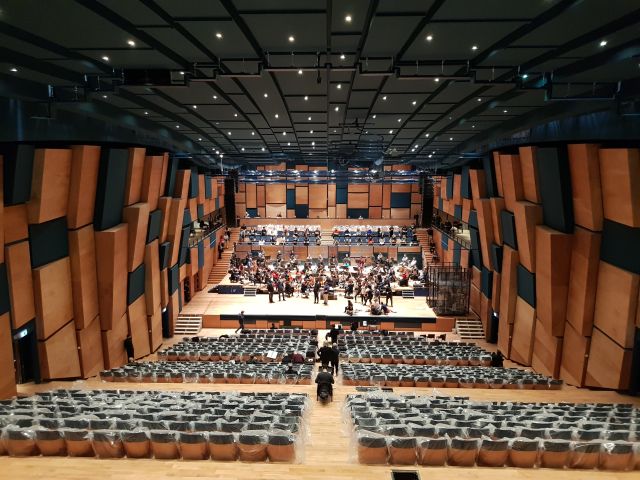 After a construction period of only 24 months, the new concert hall seating an audience of 1,100 at the Teatro del Maggio Musicale Fiorentino will be inaugurated on December 21, 2021 – exactly ten years after the first opening of this modern building complex designed by ABDR architects based in Rome.
In 2011, the opera hall with 1,800 seats was inaugurated and initially used as a concert hall; subsequently, other building sections were completed. In May 2014, following the installation of a modern stage machinery and an orchestra pit, the designated usage as an opera hall started with a glamorous opera gala conducted by Maestro Zubin Mehta. With the last section of the building complex – the sophisticated concert hall plus additional rehearsal rooms – the Teatro del Maggio Musicale Fiorentino now is complete.
Like for the opera hall opened in 2011, MÜLLER-BBM with project manager Jürgen Reinhold provided the acoustic design and ensured its implementation in the new concert hall.

Designed as a traditional „shoebox“, numerous very favorable acoustic elements have been realized in the concert hall so that the audience of more than 900 in the raked stalls area enjoys very good sightlines to the stage, an intimate spatial impression and sophisticated, excellent acoustics. The movable platform behind the orchestra podium provides space for 120 choir singers and, if required, also for the audience. The boxes to the side of the podium allow wonderful views of the orchestra and ensure an intimacy that makes music almost palpable.

Upon the theater“s subsequent request, an orchestra pit for approximately 60 musicians was included in the concert hall design, along with additional stage technology features such as a stage curtain, a fabric proscenium and trusses for the stage set. All of these elements were integrated in such a way that they do not affect the excellent acoustics in the concert hall at all – a masterpiece of planning that could be perfectly implemented thanks to the comprehensive experience of the planning team and the highly motivated contractors.

The basis of the acoustic design is a wooden support structure for the floor in the entire audience area as well as on the orchestra podium. A comparable design was first devised by MÜLLER-BBM for the reconstruction of the Teatro La Fenice in Venice and has since been realized in many venues worldwide. In the new Zubin Mehta concert hall, this acoustically very advantageous wooden structure was further optimized and generally implemented with acoustically suitable details.
The lightweight wooden floor can be excited by the orchestra sound during forte and fortissimo passages to transmit perceptible vibrations to the audience; thus, it even intensifies the listening experience in the new concert hall.
Quite essential in this context is that a comparable wooden floor on the podium, supported on several layers of wooden beams, was perfectly decoupled from the metal structure of the orchestra podiums.
The orchestra is arranged on height-adjustable, amphitheater-shaped podiums; this type of orchestra arrangement is highly appreciated worldwide.

The ceiling, precisely shaped in accordance with the acoustic concept, consists of several layers of gypsum board and ensures an ideal distribution of sound both from the musicians to all audience seats and among the musicians on the podium. A podium stepping in transverse direction additionally supports the musicians“ acoustic contact on the podium and serves to evenly scatter sound throughout the hall.
All other surfaces in the concert hall including their substructures are made of wood – which in this extent and consistency is quite special for a modern concert hall. The large wooden panels on the lateral walls, optimized in their inclination, form an ideal surface for distributing sound as desired and for acoustically enveloping the audience, thus creating a unique acoustic ambience.
Variable acoustic banners that can be activated in front of the lateral walls make it possible to individually adjust the reverberation times during speech-based events and concerts with electroacoustic amplification.

Now that the new concert hall has been completed, and with the opera hall and the so-called Cavea as an open-air auditorium on the roof above the opera hall, the Teatro del Maggio Musicale Fiorentino has three venues that can be used simultaneously for an audience of almost 5,000.

Müller-BBM GmbH is a subsidiary of Müller-BBM Holding AG with its headquarters in Planegg near Munich. Since 1962, MÜLLER-BBM has provided consulting services to clients nationally and internationally, and today it is one of the world’s leading engineering firms in the fields of room acoustics, building acoustics, sound insulation and vibration control.
Since the founding of the company in 1962, MÜLLER-BBM“s construction division has been successfully involved in the planning of international cultural venues and event spaces, such as concert halls, opera houses, theaters, open air stages, convention centers, plenary chambers as well as civic halls, music conservatories and churches. MÜLLER-BBM“s consulting experts support architects, clients, musicians, theater professionals and users in all matters concerning room acoustics and building acoustics, electroacoustics and media technology, thermal building physics, sustainable construction, building climatology, structural dynamics, fire protection, and, last but not least, they provide their experience gained in numerous interdisciplinary projects realized in Germany and abroad.
More than 450 employees form an interdisciplinary team of architects, scientists and engineers from a wide range of specialist areas.