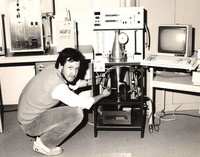 Pioneer and global market leader with profound expertise of nanoparticles

When Leander Moelter founded Palas GmbH in 1983, aerosol technology was still in its infancy in Germany. And yet he had the vision of developing a profitable business based on “measuring and generating particles”. 35 years later, Palas® holds not only 74 patent applications but is also the worldwide market leader in the field of optical aerosol spectrometers and filter testing systems.

Today, one would describe it as a start-up with which Leander Moelter began his exemplary career 35 years ago as an aerosol technology specialist in a residential building in Eggenstein-Leopoldshafen, Baden. In 1979, he had successfully completed his studies in precision engineering with a focus on communications engineering at the University of Applied Sciences of Karlsruhe, and he was already responsible for development and sales as a co-partner in a manufacturer of measuring equipment for laser Doppler anemometers. He was also a member of the VDI working group “Measurement of Particles”. However, the aerosol generation systems described in the VDI guidelines were mostly used as laboratory setups only, and the sole manufacturer of suitable measuring equipment was located in the U.S..

Although aerosol technology with fine dust measurement and air quality monitoring, things that are so self-evident today, was an area that was hardly noticed in Germany and Europe at that time, Leander Moelter recognized this as a market opportunity and discussed the plan to found a company to measure particles together with his brother Wolfgang and Fritz Munzinger. The resulting business concept convinced even the highest committees: Moelter emerged as the third winner out of more than 1,000 participants in the “Ways to self-employment” competition organized by the Capital magazine.

September 12, 1983 was the birth of the now so successful Palas GmbH, which was to become the worldwide market leader in aerosol production, dilution and particle measurement technology in the years to come.

One of the success factors of the young Palas GmbH were the annual scientific platforms on the subject of aerosol technology, which had been established early on. Leander Moelter was also a member of the round table for the founding of Technologiefabrik Karlsruhe, which also included the then Prime Minister of the State of Baden-Wuerttemberg Lothar Spaeth, representatives of the Chamber of Industry and Commerce and the University of Karlsruhe. Just one year later, in the summer of 1984, Palas GmbH moved from the residential building to the newly founded Technologiefabrik, which, from the very beginning, was regarded as an “incubator” for many later highly successful companies.

Daily in the media today, but still uncharted territory at that time: Diesel soot emissions. For their accurate measurement and analysis, Palas GmbH developed, together with the renowned Fraunhofer Gesellschaft, a filter photometer, which was followed in 1985 by the first saleable filter media test stand. The system was rightly celebrated as an innovation at the Filtech international trade fair in Utrecht: It was the world’s first measuring technology to evaluate the efficiency of a filter depending on particle size.

As early as 1986, the young Palas GmbH with only three employees developed ten products, such as the RBG and BEG dust feeders. The AGF aerosol generators are used to nebulize liquids, and the VKL dilution systems are used to dilute highly concentrated aerosols.

The installation of a particle counter of Russian origin into a filter test system and the subsequent license agreement with Dr. Umhauer & Prof. Loeffler from the University of Karlsruhe for in-house production at Palas® under the product name Particle Counter Sizer PCS 2000 proved to be particularly visionary.

While the first system still weighed 28 kg and required a peripheral zone correction, this was not necessary with the T-iris and fiber optic technology developed as part of the C1 program funded by the State of Baden-Württemberg, which led to the construction of the 2.8 kg light welas® system, a white light aerosol spectrometer, in 2000.

Between 1990 and 2000, the increasingly higher measuring accuracy under extreme conditions such as overpressure, temperatures from -90° to 250°, as well as the higher miniaturization meant a breakthrough in aerosol technology. Today, the smallest device weighing only 200 grams is light as a feather, can be wirelessly controlled and is used in numerous industries.

A leap into digitalization

Entering the digital world, Palas® also revolutionized the aerosol technology when they implemented a digital platform for the welas® system in 2008. This allowed the particle signals to be better analyzed and measured in even higher concentrations.

“Count what is countable, measure what is measurable, and make measurable what is not measurable!” In accordance with this principle of Galileo Galilei, the development of measurements of the smallest fine dust fractions in the micrometer range (PM10 and PM2.5) finally followed. With the introduction of the Fidas® fine dust measuring instruments (Finedust aerosol spectrometer) Leander Moelter quickly realized that this was the beginning of a completely different category of measuring instruments and global markets: Palas® now entered the new territory of the worldwide increasing environmental measuring technology with completely new target groups, which, however, required internationally recognized certifications and new dimensions of development, production and sales.

In 2013, together with his new R&D director Dr.-Ing. Maximilian Weiß and a management consultancy, Leander Moelter decided to streamline processes, flatten hierarchies and perform certification compliant with the ISO 9001 quality management system. At the same time, the employees were more closely involved through short communication channels.

Despite the initial skepticism of the workforce towards the new lean management, the program proved to be a complete success: Identification with the company, motivation and inventiveness, resulting in innovations, especially in the development of new nanoparticle and fine dust measuring systems for environmental use, brought Palas® further ahead. The shareholders invested all profits exclusively in development. Expansion and increases in sales led to revenues of five million Euros in 2014, an increase of 26 percent from the previous year.

Today, the Fidas® fine dust measuring systems – highly flexible stationary and mobile devices with the highest measuring accuracy that can also be applied in drones – are, at 50 per cent share, the mainstay of revenues amongst the roughly 150 products of Palas GmbH, which meanwhile grew to 68 employees.

The area of fine dust measurement offers considerable market opportunities in the future. Leander Moelter and Dr.-Ing. Maximilian Weiß, the other managing director of the company have since long recognized that air testing is not limited to outdoor applications only. Looking at the leading Asian countries in this field, interior monitoring in office buildings, schools and other buildings is becoming more and more important, and the demand for highly specialized equipment is increasing.

The subject of fine dust has also reached filter test stands in the meantime, with particle size distribution in the range of 0.3µm to 10µm being adapted even more closely to realistic conditions in future filter development, thus reacting to the real-world requirements of recent years. These new regulations are summarized in the ISO 16890 standard, which Palas® has already started to implement in the filter test benches and offers initial solutions.

A big success factor of Palas GmbH is its wide coverage of many customers and industries: In addition to federal and regional authorities, this includes the areas of automotive, environmental technology, health care and pharmacy, to which Palas GmbH supplies complete systems directly or via experienced local sales partners. In addition, Palas® supports its customers with know-how, seminars and trainings in all matters of aerosol technology and supplies everything from a One-Stop Shop. The company is thus well positioned equipped for the future as a global supplier of aerosol spectrometers and filter test systems.

Since 35 years, Palas GmbH is developing, producing and selling measuring instruments and filter test benches in the fields of aerosol technology and particle measurement. Today, Palas® is one of the international market leaders in numerous product fields. The headquarters are located in Karlsruhe, Baden-Wuerttemberg, and the measuring instruments are used worldwide – currently via a network of sales partners in approx. 50 countries worldwide.

Further information about Fidas® and other Palas® product lines can be found at www.palas.de